When Rich DeVos and Jay Van Andel started Amway, they did so for a very simple reason: They wanted to own their own business and believed others wanted the same.

Little did they know that they would start a company that would lead their industry and pioneer a business model that would be copied by many, but never surpassed.

Rich never considered doing anything other than working for himself. Rich’s father, Simon DeVos, lost his job during the Great Depression, forcing the DeVos family to move in with Rich’s grandparents. Rich’s Dad encouraged his only son to always be able to control his own destiny by never working for anyone else.

And except for being a paperboy for The Grand Rapids Press and serving in the military, Rich always worked for himself.

Not that it was easy. Rich and Jay tried and failed at seven businesses before becoming Nutrilite distributors and eventually founding Amway. The first was a flight school. Rich invested the $700 he had saved while in the military to buy a Piper Cub airplane with Jay. Still in their early 20s, they opened Wolverine Air with the sales pitch: “If you can drive a car, you can fly a plane.” Neither knew how to fly, but they believed flying planes would become as common as driving cars and hired pilots to do the teaching.

When they realized there were no dining options near the school, they opened the Riverside Drive to provide meals for students and pilots, despite neither having any cooking or restaurant experience.

The pair also invested in manufacturing wooden toy riding horses at the same time a company came out with a molded plastic model that was lighter and less expensive. Rich joked decades later that he was still finding springs and wheels from that venture.But they never gave up.

“I’ve always believed that a good challenge presents good opportunities: To learn, to grow, to gain strength or to reach a higher goal,” Rich once said. To him and Jay, failure wasn’t an end but a step in a journey of learning.

“They just took risks and realized that whether they succeeded or failed, they would learn,” said Candace Matthews, Amway Americas Regional President. “Every failure helped create learnings and build the foundation for their future success.”

In 1949 they were introduced by Jay’s cousin to the Nutrilite business – an opportunity Rich initially viewed with skepticism, but which would prove to be the foundation for their future. Through that experience they struck on the idea of helping people go into business for themselves and founded Amway in 1959. They were inspired, in Rich’s words, to put business ownership “within the reach of everybody – that’s what makes it exciting.”

That pioneering idea helped Amway grow from the basements of Rich and Jay’s homes to eventually operate in more than 100 countries around the world.

Everything they learned, from the flight school to the failed toy horse enterprise, led them to their biggest success – Amway.  And they recognized that a big reason for Amway’s success was the partnership that began when the two were in high school. 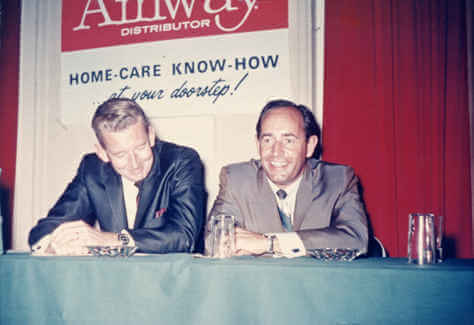 “Very rare is the lone businessman who has all the wisdom, knowledge, skills and talents to make it on his own,” Rich wrote in his final book, Simply Rich. “Jay and I knew that from the start.  We saw that opposites attract – or the whole can be greater than the sum of its parts. Jay and I were two different parts that somehow meshed to make everything work.”

“Rich and Jay modeled true partnership from the start,” Jim said. “They had the courage to risk and fail partly because they were in every business venture together for the long haul.”

Rich served as Amway President from its founding to his retirement in 1992. He also was a passionate advocate for the industry, serving as the chairman of the U.S. Direct Selling Association (DSA). The industry recognized his contributions and leadership by inducting him into the DSA Hall of Fame in 1979 and honoring him with the DSA Lifetime Achievement Award in 2012.

Rich passed away September 6, 2018. To learn more his life and legacy, visit www.RichDeVos.com.

The new Amway Overtime video series contains interviews with college football coaches to demonstrate how coaching a team is similar to leading a business.