Amy Hao experienced a number of defining moments very early in her life, starting with her premature birth.

When she was 12 days old, she stopped breathing, suffering brain damage. She spent her first 56 days in a hospital incubator. And at 7 months, she was diagnosed with cerebral palsy, which limits the use of her hands and legs.

To her parents and those who know her, Amy, now 23, isn’t defined or constrained by those early experiences. Instead, the Hao family has been determined to do everything possible to help Amy live a full life.

Making Amy’s dream of an education come true required the family to move from China to California when she was 10 years old. They didn’t know anyone in America and didn’t speak English. They couldn’t get jobs like they had in China, and they had no health insurance.

But step by step, this family made it happen. Amy is now an Amway Independent Business Owner (IBO). She’s cheerful and ambitious, studying for a master’s degree in education.

Amy and her parents, Harry and Ana, are being honored with the Amway Family Hero Award for Determination for their ability to continually overcome obstacles and persevere. It’s one of four Amway Hero Awards given to honor IBOs who build stronger communities and make positive impacts on the lives of others. 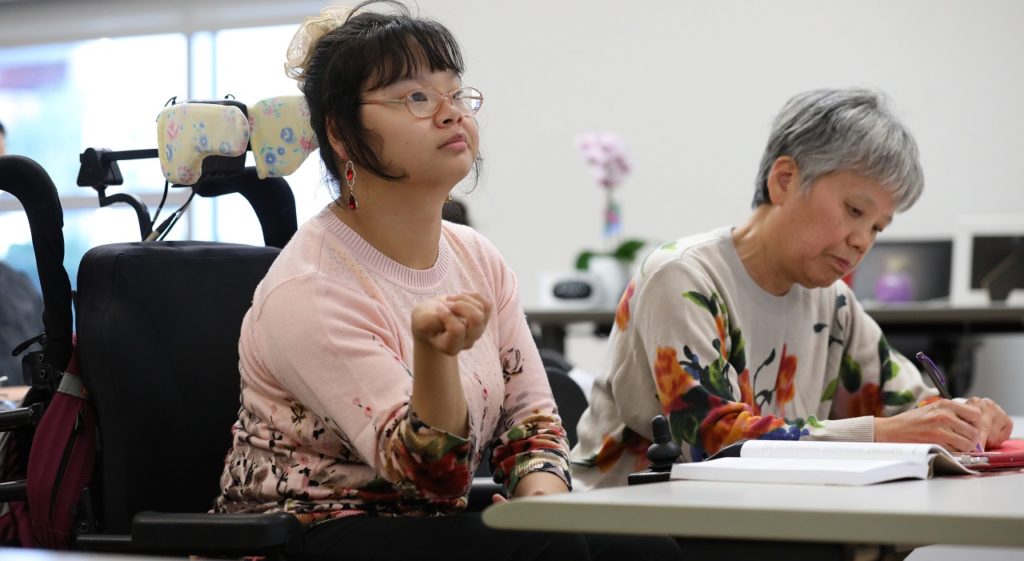 Harry and Anna Hao were married for only a year when Amy was born in 1995. She weighed just 3.5 pounds and had a full head of dark, curly hair.

At first, the couple didn’t know how to cope with Amy’s cerebral palsy. “When we got the diagnosis, we went home and could do nothing but cry,” Anna said. “We were totally at a loss as to what to do next.”

But the next steps soon became clear: They needed to do everything possible to find treatment so she could grow up to lead a normal life.

Over the next several years, Anna and Harry couldn’t begin to count the number of doctors, hospitals and clinics they visited all over China. “I did at some point want to throw in the towel,” Harry said. “But as I watched Amy grow, I saw her expressions and the intelligent look in her eyes. Her smiles provided constant encouragement for me to go on.”

On more than one occasion, Amy told her parents she wanted to go to school. But in China, there were no good options. “Amy’s condition doesn’t fit the existing education system,” Anna said.

Excelling in the U.S.

Harry and Anna eventually felt their daughter’s best chance for an education and good medical care was in the United States. They settled into a Los Angeles neighborhood and 10-year-old Amy started school.

It was hard in the beginning while she was learning English, but Amy was motivated. She caught up with her U.S. classmates and learned to use assistive technology to complete her schoolwork. She uses her head to control her electric wheelchair and her chin to control her tablet computer. She can type slowly with one index finger.

“How much Amy accomplished was amazing. Remarkable,” said Tracy Martin, the school’s inclusion specialist. “She always wanted to go above and beyond.”

Determined to make a difference

Amy finished school and went on to California State University-Los Angeles where she graduated with a Bachelor of Arts degree in 2018.

These days as she pursues her master’s degree, she can still be found zipping around the Cal State-LA campus in her electric wheelchair. Anna attends classes with her to provide assistance.

Amy has her eyes set on working with students who have disabilities. “I understand how the parents feel and how the child feels,” she said. “That’s my connection. Not every teacher understands what we are going through.” Had her family stayed in China, Amy doesn’t believe she would have the same opportunities she has in the U.S. “I couldn’t go to school, so I couldn’t support myself,” she said. “I would have no source of income. It would be so much different.

“I know being educated was my only method to improve myself and prove to others that a disability cannot hinder my goals and dreams.”

Her attitude in life—and the determination she learned from her parents—has helped Amy overcome many obstacles. “My philosophy is everyone has ups and downs,” she said. “My abilities and opportunities are endless, as long as I try my best.”

But Amy knows what her parents have done is an extraordinary act of love.

“They obviously sacrificed their life just for me to be educated so I can build a successful career,” Amy said. “I am very, very grateful for all they have done.

“Without them, I would not be where I am today. To me, they are the greatest parents in the world.”

Expiration dates on nutritional supplements are designed to ensure the highest quality and greatest effectiveness. Nutrilite explains what matters most.